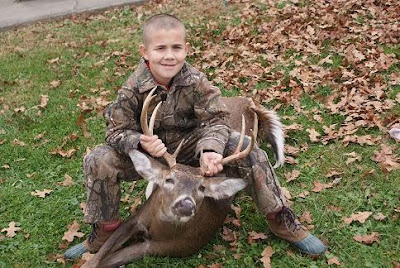 Deer and Turkey Season officially ended today and man it was a tough one for a lot of folks. For whatever reason, the rut was near non-existent in many areas. Some people are reporting that some bucks are still making active rubs and scrapes and even chasing does this week. I've yet to see a buck that has dropped his rack but that's not uncommon with excellent nutrition.

The season for me was ver unlucky and frustrating. I saw a ton of bucks early in October and went two months of absolute dead hunting. All of the sudden in January, the bucks started reappearing. I missed out on a huge 8 pointer early in the gun season and started seeing him again late, including tonight. The best part of the season is when my son scored on a nice little 8 pointer checking on some does.