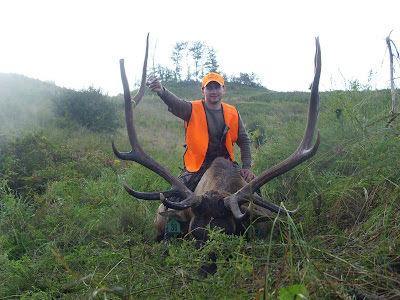 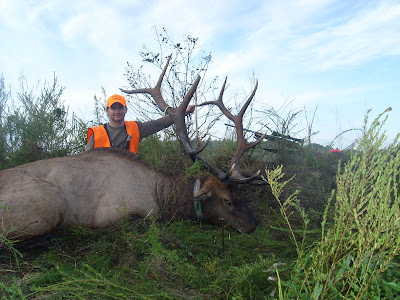 Joshua Webb killed this fantastic bull in Knott County. It green scored 330" with a 39" inside spread and it weighed 700 lbs. The bull was radio collared and ear tagged. F&W said that this bull is only 4 1/2 years old. Think about that. A fully mature bull is 8 to 9 years old and this dude scored 330 at 4 1/2. This bull was killed on the same property that the Ky Afield cameras were with a gentleman that killed a big 6x8 that grossed over 360 inches. The Kentucky Afield episode will air 8:30pm October 17th and 4:30pm October 18th on KET. Tim Farmer stayed at Danny Combs' Elk Camp who is a friend of the Webb's. Congrats to Joshua and the other hunters.
Posted by GMo at 7:19 PM