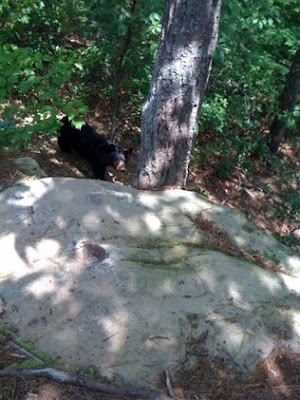 Well, I'm in Florida this week apparently where I should be making a video on how NOT to catch big bass or for that matter, any bass at all. Back in Kentucky, a man hiking was attacked by a black bear in Wolfe County. From what I understand, the bear was on the same trail with the man and instead of walking away from the bear, he took pictures and then began beating it with a stick. Bad move.

A man was taken to the hospital Sunday afternoon after being mauled by a bear while hiking in Wolfe County.

It happened around 2:30 along Tunnel Ridge Road. Witnesses tell LEX 18 that a few couples were walking along a trial when one of the men fell behind. When the others turned around to check on him, a black bear was standing in front of him. Witnesses say the man picked up a stick and the bear attacked. The others ran up and began hitting the bear with their backpacks.

The man's leg was mauled and he was taken to the hospital in Irvine. He was later transported to UK Hospital. He was in stable condition at last report

Kentucky Fish and Wildlife, along with the Wolfe County Sheriff's Department are investigating.

We're told officials are in the woods searching for that bear because it will have to be put down.
Posted by GMo at 3:02 PM