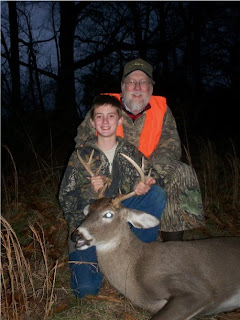 Saturday morning of the youth hunt started out as the pits. The wind was blowing. I took Wyatt and his dad took his younger brother, Wade, to a different location. Neither one of us seen a deer. We left the ground blind around 9am. At around 2 o'clock we were back at the ground blind for round 2. With the wind blowing hard, I told Wyatt that if we seen any deer in the afternoon they will probably be moving fast. At about 3:50, I got a glimpse of the deer running across the open field. As I got Wyatt ready and gun pointed to were I thought the deer was going, I than grunted trying to stop him, but he didn't slow down. I grunted 3 or 4 times before the deer stopped. I asked Wyatt if he was on him and he said yes. I reached up and took his safety off and said "KILL HIM" and he did in his tracks. I don't know who was more excited, me or him.

Great story and great deer Wyatt. Thanks to Ferrel for being involved with getting young folks into the woods.