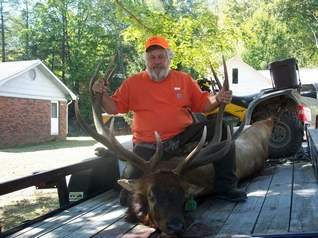 Frankfort, Ky. – Kelvin Jackson of Clay County holds Kentucky’s new state record for a non-typical bull elk. Jackson’s 8x8 bull, shot Oct. 4 in Harlan County, officially scored 367 7/8 in the Boone & Crockett Club’s scoring system. The bull beat the previous non-typical record of 349 3/8 held by Andy Kidd of McCreary County. “When I got drawn for a bull permit, you can ask my wife, I was like a kid,” Jackson said. “That’s the first time I’ve felt that way since I was seven years old.” Jackson decided not to hunt in his home county, opting instead to try a county with a larger population of elk. He began scouting Harlan County in July. “I wasn’t after a state record or anything,” said Jackson, who had previously hunted elk in Colorado. “I’m kind of a meat hunter – everything I harvest, I enjoy it.”Local residents helped Jackson locate elk, and he received permission to scout and hunt on private land. “I went to people in a little place they call Greasy,” remembered Jackson. “They told me where they’ve been seeing elk. When I found the herd, there were 22 cows and seven bulls. I stayed behind a big mound of dirt to watch them, up into August. I’d go there once a week to watch them.”Jackson’s work paid off. As he studied the herd’s behavior, he prepared to take a long-range shot. “They were in a field, and if you approached them, they would leave,” Jackson said. “I practiced shooting long-range because I figured I’d have to do that.”Jackson took the bull at 465 yards with one shot from his 300 Remington Ultra Magnum. The bull’s antlers had to dry for 60 days before official scoring could take place. Jackson’s elk is the largest non-typical bull officially scored and reported to the Kentucky Department of Fish and Wildlife Resources for the 2008 season. “This bull is an outstanding example of what conservation can accomplish,” said Tina Brunjes, big game program coordinator for Kentucky Fish and Wildlife. “A little more than a decade ago, Kentucky had no wild elk. Today, we have a large, healthy herd that consistently produces quality animals that any hunter would be proud to take home.”Kentucky Fish and Wildlife intends to issue 1,000 quota elk hunting permits for the 2009-10 season. The state’s herd is now estimated at 9,000 animals.“Our restoration program has reached a management stage,” Brunjes said. “It will take the help of hunters, along with sound, science-based management decisions, to maintain the kind of elk herd that produces such an exceptional bull.”So far this season, no hunter has reported a typical bull larger than the 371 0/8 elk taken last year by Greg Neff of Kenton County. Archery season for elk, however, continues through Jan. 19, 2009.Elk lottery applications for the 2009-10 hunting season are on sale now through April 30 for $10 online at fw.ky.gov. Kentucky Fish and Wildlife will conduct a random drawing in May to award the quota hunt permits. The department plans to issue 250 bull and 750 cow elk hunting permits.
Posted by GMo at 8:59 PM